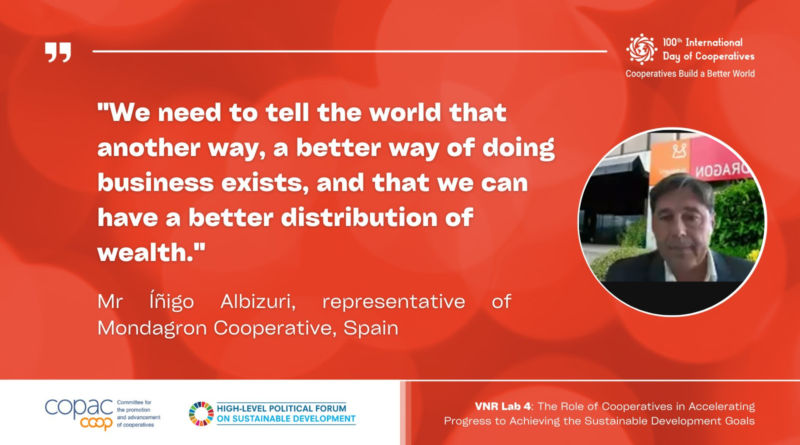 CICOPA president spoke at the UN High-Level Political Forum on Sustainable Development side event, called for an alliance between cooperatives and governments.

The Committee for the Promotion and Advancement of Cooperatives organized a side event in New York on 7 July 2022 in collaboration with the Permanent Mission of Mongolia to the United Nations (UN), as part of the Voluntary National Review. This side event took place during the High-Level Political Forum on Sustainable Development (HLPF).

The event “The Role of Cooperatives in Accelerating Progress to Achieving the Sustainable Development Goals” focused on cooperatives’ role and work they provide in the implementation of the 2030 agenda. It provided an opportunity for the UN Member States to present their national action plans in support of cooperatives and share good practices to advance the Sustainable Development Goals (SDGs).

In his intervention, Iñigo Albizuri Landazabal, President of CICOPA, discussed the false premises on regulation, responsibility toward community and wealth distribution underlying the current economic model, and pointed out that these shortcomings are directly addressed by the cooperative model. During his intervention, he called for better regulation from UN member states to foster the development of cooperatives. He added:

“Cooperatives and governments need to form an alliance to ensure a fair distribution of wealth from the very beginning”.