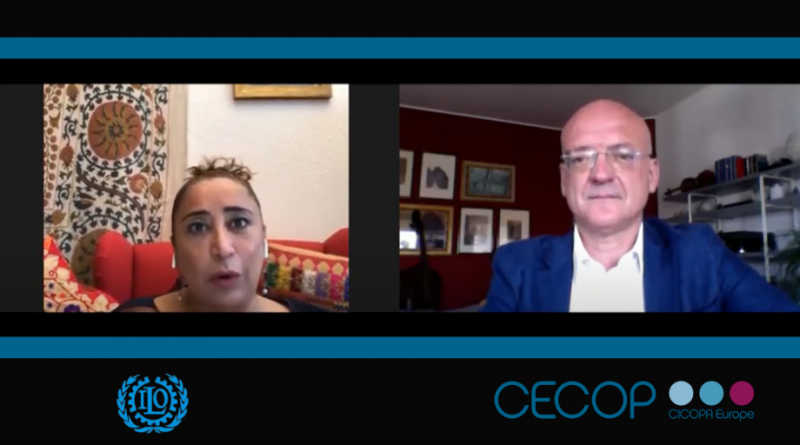 This is a translation from an ILO interview. If you wish to read the original text click here. (Italian)

ILO interview with the President of CECOP, Giuseppe Guerini

Created in March 1920, the ILO Cooperative Unit marks its centenary in 2020. On this occasion, the series of interviews “ILO COOP 100” presents past and present colleagues and key partners of the ILO who have been closely involved in the work of the ILO on cooperatives and, in general, on the social and solidarity economy (SSE). The interviews reflect on their experiences and contributions, and share their views on the future of cooperatives and SEE in an evolving world of work.

How did you get involved in cooperatives for the first time?

I started working in a cooperative in February 1988, at that time, I had just completed the Italian Civil Service, which is an alternative to the compulsory military service, I was in fact a conscientious objector and I was part of pacifist and environmental associations.

Some friends suggested that I start working in a cooperative that he wanted to take over from an artisan, a “Ciclofficina”: that is, a shop for the sale and repair of bicycles. This is how my cooperative adventure began, as a bicycle mechanic artisan. In the workshop, we started making the first work placements for disadvantaged young people. It was there when I discovered my pedagogical and social vocation and started studying, attending evening schools to graduate and later to acquire a degree as a “Professional Educator”.

Since then I have always worked in social cooperatives carrying out various positions, until I came to deal with representative associations by acting as President of Federsolidarietà between 2010 and 2018. Since 2016, I have been President of CECOP Europe.

Could you tell us about Ecosviluppo?

Ecosviluppo is a social cooperative for work integration, which currently employs 220 people, from which 38% are disadvantaged workers. The cooperative has 25 years of history and has grown a lot in recent years. I was the cooperative’s President for 12 years, from 2008 until May 6th.

Ecosviluppo deals with waste management, collection and sorting, street cleaning, and environmental education. It therefore operates within the circular economy, and has a turnover of over 10 million euros. It is one of the largest cooperatives for work integration of disadvantaged people in the province of Bergamo, Italy.

The social cooperatives of Confcooperative Federsolidarietà have developed a democratic, participatory, and multi-stakeholder identity that pursue a social economy enterprise project for and with the local community. These principles are embodied in the cooperatives’ Code of Ethics. The member cooperatives operate in all social, healthcare, and educational sectors, and in many entrepreneurial areas, where they activate work integration paths. Confcooperative Federsolidarietà organizes voluntary civil service to offer young people a training experience aimed at sharing the ideals of equality and active citizenship.

The widespread presence – divided into 20 regional federations and 70 federations and provincial sectors – make Confcooperative Federsolidarietà the most important representative organization for social cooperation in Italy, both as political and trade union actor. Today there is a cooperative of Confcooperative Federsolidarietà for every 11,200 inhabitants and their activity ranges in the social, health and educational sectors and in innovative pathways to work in many productive activities of goods and services.

At the end of 2017, the number of associates amounted to 6,245 members (cooperatives), including 263 consortia (second-degree cooperatives). Out of all affiliated social cooperatives, 67% operate in the social-health and educational sector and 33% in the work integration of disadvantaged groups. On average, 400 new startups join each year. The affiliated social cooperatives have 228,900 members, from which 26,000 are volunteers, and approximately 225,900 workers from which 18,000 are disadvantaged. The total turnover exceeds 7.2 billion euros and at the same time, the capitalization was 71.5% in the last 8 years. Over the same period, investments grew 57.7%.

Confcooperative Federsolidarietà represents about 55% of the total employment of social cooperation in Italy. The social cooperatives of the Federation have a work integration capacity for people with disability 25 times higher than the rest of the economic system. 64.5% of members are women, 10% are under 30 years old, and almost 70% of workers have permanent contracts.

Could you tell us about CECOP and CICOPA?

CECOP was founded in 1979 in Manchester, England, and the permanent secretariat was established in 1982 in Brussels. In the second half of the 90s, it became a real confederation as well as the European organization of CICOPA, thus formally extending its geographical scope to the entire European continent. During the first half of this decade, CECOP actively prepared the ground for the establishment of Cooperatives Europe, the European organization that brings together cooperatives from all sectors, founded in 2006 in Manchester.

See the recent “All for One” publication on non-standard work.

Could you tell us about your work with the European Economic and Social Committee (EESC)?

I arrived at the EESC in 2010 as a representative of Confcooperative, and in recent years, I have worked extensively on issues concerning work, the social economy, small and medium-sized enterprises, taxation and banks with particular attention to cooperative banks. I also dealt with digital innovation and block chain technology applied to the social economy.

What do you think is the benefit of the International Labor Organization compared to cooperatives?

The cooperatives, and especially the worker and social cooperatives, which I represent, have “work” as their main mission and their very raison d’etre. For this reason, ILO is a fundamental reference for us. Highlighting the value of work, in an economic context, that in recent decades has been too dominated and conditioned by the finance over the economy, is increasingly important today to restore predominance of the real economy, but also better evaluate how we measure economic value. So having an international institution that deals with work as the ILO is incredibly relevant. As your centenary motto states – future to work – , I feel like we share the same objectives and purposes.

What can cooperatives do in the face of emerging risks such as the pandemic and climate change?

It is difficult to imagine the future when we try to make projections and hypotheses for the planning of the activities of our enterprises in a context of normality. It is even more complex to do it now, while the feeling of bewilderment from these last months remain, especially if we add the uncertainty of the times we face. Once the tension of emergency responses has ceased, we should recover our energy and clarity to have ability to think about the future.

The pandemic has put our local communities in front of the great vulnerability to which our social and healthcare system was exposed. It has also violently showed us that our productive and economic system depends on the social infrastructure, and the welfare system we have built up over the years.

There has long been a belief among social economy organizations that a good welfare infrastructure is not only an important pillar for taking care social distress, but constitutes an essential pillar to support the competitiveness of the European economic and entrepreneurial system.

This serves as wake-up call that the pandemic has strengthened and that we are required to put in effort in innovating the system of social and health services, strengthening home care, and rethinking the reception system for dependent and elderly people, given that many were the victims in nursing homes.

In the recent weeks, we have had to adapt quickly to the use of new technologies to continue working, or to develop new services. This has been a great opportunity for change and innovation, which we should exploit and that could help us rethink work. In any case, it should help us enter with less fear into the dimension of the “future of work”, in which technology; artificial intelligence and the internet of things perform increasingly important functions. Functions that include protecting people’s health and protecting the environment.

Today we understand even more the potential of tele-medicine, and in these difficult months, we have seen that even the relationships and education have been carried out remotely, with the help of video calls and other communication and collaboration tools remotely.

We then should think about the possibility of reducing movement, traffic, environmental impacts by reorganizing city and work times with greater care. Regardless of the sector in which they operate, our organizations have conformed to the image and likeness of the large manufacturing factories of the second and third industrial revolution.

We have learned that in some cases, the productivity for some services has even increased, or in any case has not decreased, even if managed remotely. Unlike what might have expected, a worker at home produces as much as in the office, and this teaches us that this is the time to focus more on objectives and results, and less on working hours and times. Let us think about how this could also help to rethink all of the contracts here that are in an indefinite limbo between self-employment and dependent work, for which regulation and hourly payment always appears to be full of critical issues.

Working remotely has also showed us, in some cases, that we can really reduce mobility. If we tried to increase some daily activities managed remotely, not only for work, but also to respond to needs such as shopping, accessing care or educational and training services, we will be answering to the challenges of innovation and system change. We must be able to learn the lesson of the COVID-19 crisis.