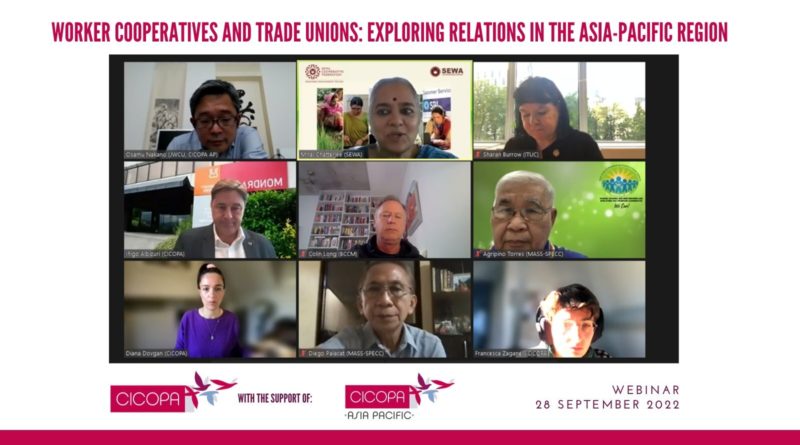 With a focus on the Asia-Pacific region, the webinar organised by CICOPA in collaboration with CICOPA AP explored the opportunities for collaboration among worker cooperatives and trade unions.

On the 28 of September 2022, CICOPA with the close collaboration of the recently established network of CICOPA Asia-Pacific hosted the webinar “Worker cooperatives and trade unions: Exploring relations in the Asia-Pacific region”.

Secretary General of CICOPA, Diana Dovgan, in her introductory speech, highlighted the particular labour relations in worker cooperatives – that of a worker member, also known as worker-ownership. Often misunderstood, this unique type of labour relations, which does not fully equate to conventional salaried labour or self-employment, has been a source of some misunderstandings with trade unions but also of great collaborations.

Diana Dovgan’s introduction was followed by the presentation of four best practices from the region of Asia-Pacific, the geographical focus of this webinar. CICOPA members from India, Japan, Australia and the Philippines shared their experiences of collaboration between worker cooperatives and trade unions in order to protect the rights of workers, particularly those in vulnerable situations, and to empower them.

While relations between worker cooperatives and trade unions differ in each country and region of the world, trade unions and cooperatives share common historical roots as well as a common ground of values and objectives in the promotion of workers’ rights, decent living standards, and democracy at work.

The current transformation of work, the weakening of salaried labour, and the new types of work such as freelance work and platform work, represent a new opportunity for worker cooperatives and trade unions to collaborate and to provide answers and protection to those isolated workers, who often suffer from precarious conditions and poor access to social rights.

This opinion was shared by Sharan Burrow, General Secretary of International Trade Union Confederation (ITUC), special guest of this webinar.

In Burrow words: “Cooperatives and the broader social and solidarity economy are more important than ever been because the labour market is broken. 60% of the world workers are working informally, with no rights, no minimum wages, no rule of law, and no social protection, in most instances.”

ITUC, she continues, wants to support the social and solidarity economy as a democratic choice on the way people work, but also as a way to formalize work in order to realise the ambition of the UN millennium declaration which recognizes that all workers, irrespective of the employment contract, should be entitled to a labour protection floor, meaning fundamental rights, occupation health and safety, minimum leaving wage and social protection.

A partnership, she confirms, is essential, in a growing unequal world and a world affected by the climate crisis. She sees many opportunities for collaboration in advocating for a new social contract where cooperatives are providing an important example in the fight for secure jobs, just wages, and universal social protection.

In his concluding notes, CICOPA’s President Inigo Albizuri welcomes this event, giving visibility to cooperatives as an alternative model of enterprise, which put workers and sustainability at the centre.  ‘In times of change, working together is more important than ever’, he concludes.

We thank CICOPA AP for the co-organisation of this successful event.