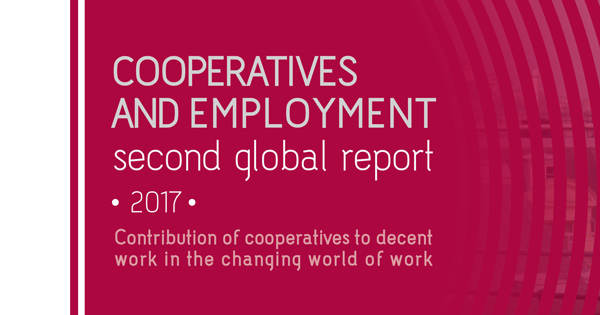 Employment is one of the most important contributions made by cooperatives throughout the world. Whilst taking into account initiatives and debates at the international level regarding the issues of the future of work and the changing world of work, the present report also aims at updating the 2014 study, “Cooperatives and employment: a Global Report”, by:

However, apart from some technical problems that could be solved by obtaining more qualitative information on currently used typologies, a number of conceptual issues should be discussed further, such as the distinction between producer cooperatives and worker cooperatives, statistical definitions for worker ownership and boundary issues concerning employment in subsidiaries and enterprise-members in enterprise cooperatives.

By using the proposed method and considering the issues being raised, the report presents updated quantitative information on cooperative employment, as well as on the number of cooperatives and types of members. Based on data from 156 countries, the updated estimate shows that employment in or within the scope of cooperatives concerns at least 279.4 million people across the globe, in other words 9.46% of the world’s employed population. Out of this figure, 27.2 million work in cooperatives, including around 16 million cooperative employees and 11.1 million worker-members.

Turning then to qualitative aspects of cooperative employment, the report examines cooperatives’ specific contributions to addressing problems related to work and employment in the informal economy. While underlining the importance of an integrated approach based on the involvement of various stakeholders, this report proposes that cooperatives be part of such integrated solution, in various ways:

In addition, the present report pays special attention to the potential contribution of cooperatives to technological development and accompanying social change. In the changing world of work, cooperatives need to respond to new opportunities and challenges. The concepts of “platform cooperativism” and “commons” could usher in innovative ways of working in, and with, cooperatives in the 21st century. However, while fully recognizing the contribution made by these new concepts, this report proposes their combination with the tools and methods of the cooperative movement, which would strengthen and give concrete expression to the contribution they are able to make to address problems related to work and employment in the changing world of work.