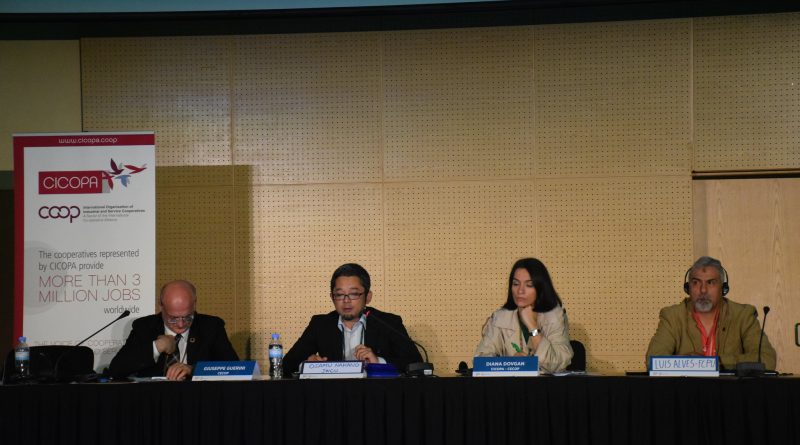 Feedback from CICOPA and IHCO joint session, held on 16 October 2019 in Kigali, Rwanda, in the framework of the ICA Conference “Cooperatives and Development”

Rising inequalities and their consequences seem to have finally reached leaders’ public discourse and political concern at many levels. However, whether this awareness generates appropriate mobilization and relevant public policies to help shrink the gap between the rich and the poor remains to be demonstrated.

The dire consequences of the economic crisis inspired Thomas Piketty’s best seller “Capital in the XXI century” leading to previously unheard calls to reduce inequalities also from leaders and financial institutions mainly responsible for austerity measures and social policy budget cuts. States’ disengagement from their own prerogatives, such as intervening in the economy by supporting social policies and public research (as lamented by economist Mariana Mazzucato in “The Entrepreneurial State”), exacerbates inequalities by leaving behind those who are most in need.

Health, industrial and service cooperatives fight against inequalities by nature and very often fill the gaps left by lack of proper public policies. Locally rooted, they intervene for the well-being of their communities because they see first-hand the consequences of neoliberal policies and austerity. As Nobel Prize economist Amartya Sen puts it: “A society can be Pareto optimal and still perfectly disgusting”.

Reducing inequalities through health industrial and service cooperatives was the topic of the joint CICOPA and IHCO (International Health Cooperatives Organisation) parallel session at the ICA Conference 2019 in Kigali.

For cooperatives in industry and services worldwide, wealth redistribution is key to reducing inequalities, but our newly elected CICOPA President Inigo Albizuri Landazabal went further and specified that a much fairer approach would be to discuss wealth, labour and income distribution in the first place rather than re-destributing it after inequality occurs.

With health and inequalities being intrinsically linked, Carlos Zarco, President of IHCO, stated that cooperatives represented by IHCO’s and CICOPA have a long tradition of fight for equality and equity and always operating in the interest of their communities.

CICOPA Vice-Presidents, Luis Alvez and Giuseppe Guerini, took the floor to stress out the importance of rethinking the concepts of productivity and combat individualism as key to reducing inequalities, while injecting democracy into the economy especially now that societies face the challenge/opportunity of digitalization. Diana Dovgan, Secretary General, stated: “Because inequalities are rooted throughout generations, they look normal and irreversible, but they are not! They are always the consequence of political choices”.

Parallel sessions’ recommendations have fed into the ICA Conference conclusion.

Conclusions from roundtable 1: Cooperatives reducing inequalities in access to social services and at the workplace

Health and inequality are intrinsically related. Many bad results of health indicators outcomes are strongly linked with the higher levels of social and income inequality. Otherwise, health is instrumental to economic growth, and in reducing inequality and poverty. Health is a holistic concept; social, economic and environmental conditions in which people live strongly influence health.

The social determinants of health are mostly responsible for health inequities – the unfair and avoidable differences in health status seen within and between countries. Health cooperatives are in better position than other business models to reduce inequalities and provide access to healthcare because: