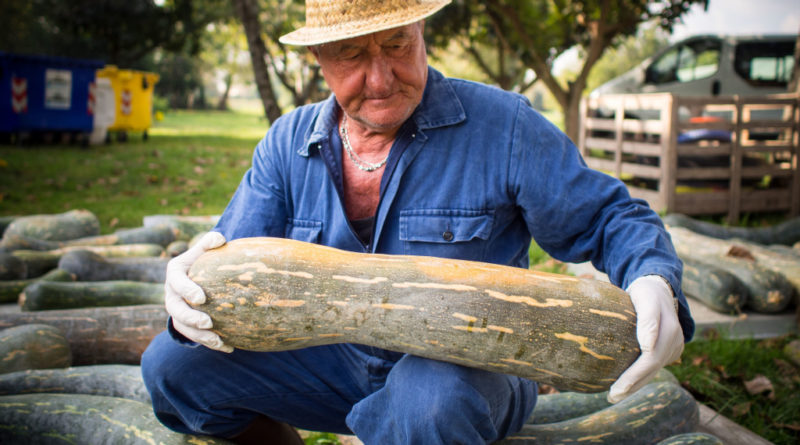 In Italy, social farming is an important and growing instrument of territorial cohesion and development, linking agriculture to local welfare. In the region of Campania alone, social cooperation employs 12,460 people and has more than 2,000 volunteers. Full-time workers represent about 68% of this figure, 67% of which are women and 4.7% are disadvantaged people. (Data from Confcooperative Campania)

The “Fuori di Zucca” social farm was created in 2005 in Aversa, between Caserta and Naples, as a result of the vocation and the aspirations of the members of the “Un fiore per la vita” Cooperative to continue the historic rural tradition of Campania Felix. The idea was to introduce modern farming methods and new productive activities to restore dignity and value to people through the creation of a social economy, to promote respect for the environment and to develop people’s awareness and consumption of local products. Located in a former psychiatric hospital, the social farm is a social cooperative whose mission is the inclusion and social integration of people experiencing difficulties, based on the notion that work is an important aspect for the emancipation of the individual.

The social farm employs 16 workers, nine of which are worker members and the founders of the cooperative, who come from different backgrounds as educators, animators and agricultural experts. Others started working for the cooperative following a rehabilitation process which usually lasts for two years until the people involved either find a job within the cooperative itself or somewhere else.

“The added value of a cooperative is that being part of it is not only a job, but also a passion. The development of the individual and the community around them is a significant element of competitiveness compared to traditional forms of employment”, says Giuliano Ciano, member and president of the cooperative.

The social farm model also provides territories that suffer from criminalization and injustice with the opportunity for redemption. The “Un fiore per la vita” cooperative is part of the Nuova Cooperazione Organizzata Consortium whose aim is to contribute to the development of a culture of inclusion and legality through activities aimed at the involvement of the community, with a view to changing the socio-cultural reality of the territory by investing in goods confiscated from the Camorra.

A myriad of examples

In the Campania region, there are several other examples of cooperatives that integrate people with mental health issues or difficult personal circumstances into the world of work through agriculture activities. In Irpinia, there is the Fattoria Al Fresco di Cantina, managed by the Il Germoglio cooperative, where prisoners produce wine from the vineyards that they cultivate inside the prison of S. Angelo dei Lombardi. The Al di là dei sogni Cooperative in Maiano di Sessa Aurunca has made a series of investments in assets confiscated from the Camorra, creating a community for people with mental health issues, a social organic farm and a processing center. In Salerno, there is the Capovolti cooperative which manages a social farm in San Vito di Monte corvino Pugliano. The L’orto dei semplici project, which is still in its start-up phase, was created at the Benevento Geobiolab in Contrada Ponte Corvo, in order to promote self-entrepreneurship in agriculture by integrating people with mental health issues into the world of work.