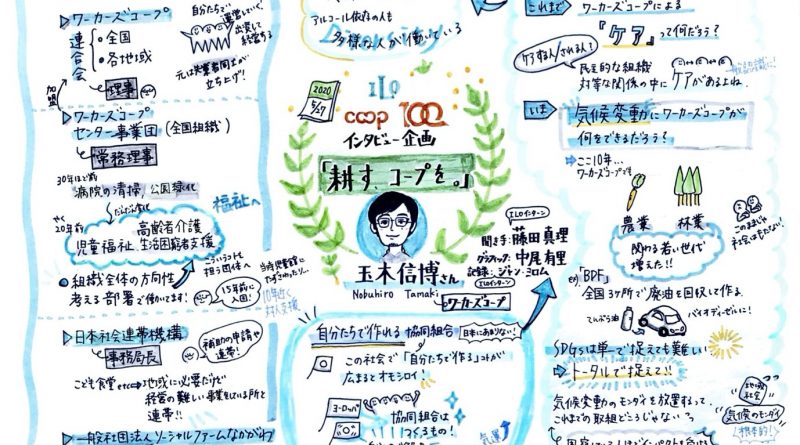 In celebration of their 100 years, the International Labour Organization’s (ILO) Cooperative Unit has organized a series of interviews that reflect on cooperative activities all around the world. Hereunder are some highlights of the prestigious interview with Mr. Nobuhiro Tamaki, the Director of the Japan Workers’ Co-operative Union (JWCU) had the chance to do with the ILO.

At the beginning of the interview Mr. Tamaki, provides us with a very useful definition for anyone entering the worker cooperative world. As he explains it worker coops are: “Cooperatives in which all working people and citizens invest in the coop, participate in the management, run the business democratically, share the responsibility, and create jobs that benefit people and the community.”

CICOPA member JWCU currently represents worker members from sectors such as elderly care, services for children and parents, care and support for people with disabilities, among many others, representing more than 10,000 worker members and 5,000 non-member workers.

In the last months, CICOPA has been following closely the developments of the epoch-making event, when JWCU submitted the “Workers Cooperative Act” for revision to the Japanese House of Representatives. CICOPA is keeping a close eye on it, with the hopes that later this Fall, it will be passed.

As mentioned on a previous article, historically speaking, Japan has no single cooperative law, but instead every sector has its own. This has posed challenges for starting a new cooperative, and it has been a struggle for worker cooperatives since their inception.

The ILO also asked Mr. Tamaki what changes will take place when the workers coops law is passed, to which he replies: “I believe that if we can have the first worker’s cooperative law established in Japan, it will be an opportunity for not only the worker coops, but also for Japan to spread the idea of forming cooperatives by people themselves.”

He also mentions how in many European countries, legal frameworks exist, that allow to establish these types of cooperatives, while in Japan they have just started to get the recognition and hopefully the Parliament will make a law, which is something that excites the JWCU and CICOPA alike.

To conclude, he gives some advice on how to expand the cooperative movement to youth: “I think it would be an option for people to not only work for one worker cooperative, but also to create a worker cooperative while having their own jobs and to establish a local consumers coop, so that they can have a variety of channels in their own lives. I think it would be great if we could create a social climate where people could have more freedom in the way they live and work.”

This article on the ILO COOP 100 Special Interview Series “Cultivate the COOPs”. Click here to read the original full interview.